The wrestler Frank Stäbler turns in the small final of Nur-Sultan a 0:5 lag and fetches World Championship bronze. After the bitter round of sixteen, the Musberger also secured his important Olympic ticket via the hopeful round.

Frank Stäbler wins bronze at the Wrestling World Championships in Kazakhstan. In the Greek-Roman class up to 67 kilograms, Frank won against Mohamed Elsayed. The Egyptian put Frank under a lot of pressure and was already 5 points ahead. But as in all his competitions, Stäbler knew about his qualities and turned the fight around in his favour - the final score 6:5 and World Championship bronze. UNBELIEVABLE!

The qualification for the Olympic Games in Tokyo 2020 was already secured before the small final. This was only possible because Frank's opponent in the round of sixteen and conqueror Ismael Borrero Molina reached the final.

The Olympic Games in Tokyo will also be the last wrestling matches for Frank Stäbler. And this is exactly what everything is designed for. Due to a change in regulations, the actual weight class of Frank Stäbler was abolished for the upcoming Olympic Games. That's why for months Stäbler had been "slimming down". From 74 kg to 67 kg. "It's a way through hell," he said before the World Cup.

"We are very pleased that we have been able to support Frank for years with our supports and orthoses and we particularly like to see the metacarpal thumb splint in action," says Torsten Schweizer, SPORLASTIC's authorised signatory. "We are always on the edge of our seats at all competitions - as we are now in the official live stream in Kazakhstan. On Frank's way to Tokyo we will of course continue to accompany him and hope that he and his body will continue to cope well with the exhausting diet. His outstanding career would have deserved, as we think, a golden conclusion".

Become a fan of Frank Stäbler now!
If you want to join Frank on his Road to Tokyo 2020, visit and link to the SPORLASTIC Facebook page (https://de-de.facebook.com/sporlastic) or follow us on Instagram (https://www.instagram.com/sporlastic_official). In this way, you will always get the latest and closest impressions of his preparations. 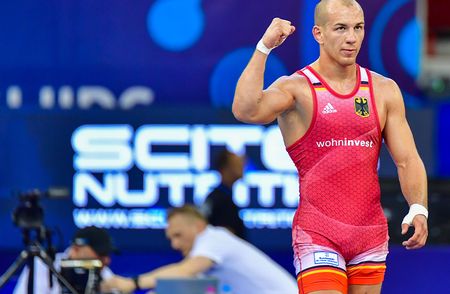