SIMPLY UNBEATABLE: FRANK STÄBLER IS ONCE AGAIN THE GERMAN CHAMPION IN WRESTLING

Frank Stäbler is German Champion for the seventh time! In the new weight category of up to 72 kilograms, he defeated Hesse's Andrej Kurockin from KSC Mösbach in the Greek-Roman style at the German Championships in Burghausen.

After Stäbler had renounced the European Championship in May due to the birth of his daughter Alia Marie, the focus in recent weeks was entirely on the German Championship in Burghausen, Stäbler's first highlight of the season.

After victories over Jannik Malz (Sulgen), Maximilian Schwabe (Pausa) and Timo Badusch (Köllerbach), the Musberg duel between Frank Stäbler and André Ehrmann took place in the semi-finals. The two team-mates and friends did not give each other anything, but finally Stäbler could keep the upper hand with 8:2 and enter the final.

There the four-time wrestler of the year met the 21-year-old up-and-coming talent Andrej Kurockin. However, the youngster had no chance against the 2015 and 2017 world champions. Already after 40 seconds Stäbler won sovereignly by shoulder victory.

Frank was very satisfied with the successful weekend in Burghausen. "I am very happy about my seventh German championship title. It really wasn't an easy path and demanded everything of me until the final. Now I'm fully focused on preparing for the World Cup in Budapest in October."

We're glad we've been able to support Frank for years. We wish him many successes at the World Championships in Budapest in October and of course accompany him on his way to the Olympic Games 2020 in Tokyo".

Become a fan of Frank Stäbler now!
If you would like to accompany Frank on his sporting journey, visit and liken the SPORLASTIC Facebook page (https://de-de.facebook.com/sporlastic/) or follow us on Instagram (https://www.instagram.com/sporlastic_official/). In this way, you always get up-to-date and up-close impressions from his preparation. 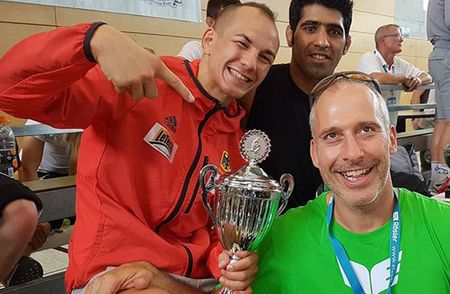