Two-time Paralympics winner Sebastian Dietz has for years been at the top of the podium at international competitions in his two disciplines of discus and shot put. The title at a European Championship was missing until now – but that has now changed.

At the Para European Athletics Championships in August 2018 in Berlin, Sebastian sensationally won the shot put competition in the starting class F36 with a distance of 15.28 metres. His international title collection is finally complete. Despite his victory in Berlin, the ambitious athlete is not completely satisfied: He was only a few centimetres short to set a world record.

Dietz, who suffered a severe cervical vertebra injury in 2004 and is supported by SPORLASTIC's FOOT-UP® foot lift orthosis, is not only a great athlete but also a motivator for others. To his competition in Berlin, he had invited over 50 stroke children from the SCHAKI club – they could experience live how he won the title.  Sebastian promotes the inclusion of people with disabilities and is particularly committed to young talents in para-light athletics. During the first weekend in September, the 33-year-old and his club BSG Bad Oeynhausen organized a talent day for children, teenagers and young adults with disabilities - a complete success.

After the European Championships in Berlin, Sebastian Dietz is already looking ahead to the Paralympic Games in 2020: "Now the task is to use the time until Tokyo. This was a foretaste, in two years even more is to come," says Dietz.

Become a fan of Sebastian Dietz now!
If you want to accompany Sebastian on his way to Tokyo, visit and link to the SPORLASTIC Facebook page or follow us on Instagram. This way you will always get the latest and closest impressions of his preparation. 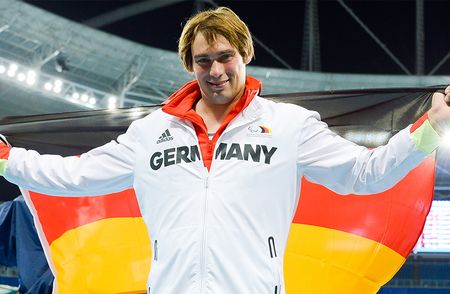