28-year-old wrestler Frank Stäbler from Musberg sensationally took gold at the World Championships in Paris. After six strength-sapping fights in just ten hours, Stäbler accomplished his second World Championship title in the Greco-Roman style since 2015 perfectly. Stäbler's triumph in Paris also set a new German record. He is the first German wrestler to win two World Championship belts in two different weight classes (66 kg and 71 kg). And all this in the space of just two years.

But not all that glisters is gold. Looking back over the young athlete's last two years, it's clear to see that behind every success there have been knock-backs, tears and hard work. After winning the 2015 World Championship in Las Vegas, Stäbler threw himself into the preparations for the 2016 Olympic Games in Rio de Janeiro. The preparations were tough, and Stäbler had to push himself to his limits more than ever, but was very well prepared. But then came the shock. During his very last training sessions before his departure for the Olympic Games, Stäbler badly injured his ankle. The diagnosis was devastating: a tear of the syndesmosis ligament. The Olympics over for Stäbler, even before they'd even begun. "Anyone who knows me will know that giving up is not an option for me. The Olympics were my great goal, and I wanted to prove something to myself", says Stäbler.

And that's exactly what happened. Despite his injury, Stäbler took part in the Olympic Games in Rio with a major handicap. "At the time, however, my opponent was unaware of my serious injury. I didn't want to show under any circumstances that I was walking on the mat with any sort of weakness. During the competitions, the FIBULOTABE® ankle bandage from SPORLASTIC was a tremendous help. The pain didn't go away, but I was able to put a lot more strain on my foot", says Stäbler. Ultimately, Stäbler managed to achieve a very respectable seventh place. The goal of becoming an Olympic champion simply wasn't achievable due to the severity of his injury. The disappointment was tremendous.

After a little time away from the sport, Stäbler's inimitable ambition quickly returned and his next goal was already clear: to become the 2017 World Champion in Paris. Yet this time too, not everything ran smoothly. In the spring of 2017, Stäbler sustained two interior ligament tears in his knee. In order not to jeopardise his chances of becoming World Champion, he had to seek treatment fast. "Without the help of my partner SPORLASTIC, I wouldn't have been able to return to training so quickly. The GENUDYN® CI NOVEL knee orthosis gave my knee the rest it needed. The GENU-HiT® knee bandage also provided me with a stabilising aid during the World Championship competition. I am so grateful for the first-class support I've received over so many years", says Frank Stäbler.

"We're delighted to have been able to support Frank for years. We've never been able to provide an athlete with so many bandages and orthotics", says  Torsten Schweizer, Authorised Signatory of SPORLASTIC, with a smile. "We've been through a lot together, and of course we'll be supporting him on his way to the 2020 Olympic Games in Tokyo." 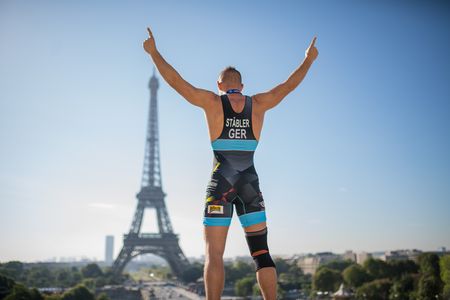